For days now I’ve been itching to sit down and blog, but just haven’t had the time.  It’s been crazy busy here lately!  Plus, the topics pressing on my typing fingers haven’t been particularly blog-worthy.  So I suppose it’s a good thing that I haven’t had time to let them out.  Even now, it’s 10:30 at night and I’m having to look at the screen with my head tilted back a little so I can make out the words I’m typing.  Last night wasn’t particularly kind to me in the sleep department, and I’m totally feeling it.  But I finally got Brennah to go to sleep a few minutes ago, and the quiet of my house is too much for me… I must take advantage of it… if only for a few minutes!

So Nathan and the current GE team left this-morning for the Zoque jungle.  I know I’ve said it a hundred times before, but hey.  A little repetition never hurt anyone.  I am so proud to be married to him!  I love how passionate he gets when he talks about the status of any given project he’s got going.  I love the way he lights up when someone asks him a deep question about the Zoque or Ch’ol people.  God has given Nathan some unique abilities that I think he’s doing a great job putting to use.

That’s the end of my rabbit trail.  Back to topic.

This is day 1 of 5.  Hopefully, Nathan and team will be back on Friday night just in time for dinner.  They will be doing water filter installation (you can check out the Projects page on our website if you are wondering what on earth I’m talking about), a stove installation, and a children’s program.  They should be pretty busy, and come home pretty wiped out.  I’m told that the days just fly by for these teams.  Which is odd, because they get incredibly slow for us!  It’s a bit of a shock to my system, actually, because things have been so nuts the last few weeks.  So today when I started dragging and thinking “wow we must be close to bedtime” and realized it was only 5 pm, I couldn’t believe it.  As in, I actually checked another clock thinking “that can’t be right.”

In order to better survive these times of being single mom for a few days, I try to give myself lots of projects.  This is never difficult as my house almost always looks like a bomb went off.  Or at least like a few toddlers tore through it.  Either way, the look is about the same.

Todays project (after getting our monthly update sent out) was the kitchen.  It’s slowly been building clutter, and the disorganization has been getting more annoying.  So I tackled it.  You should see my sparkling counters!  Actually, I’ll take a picture for you right now. 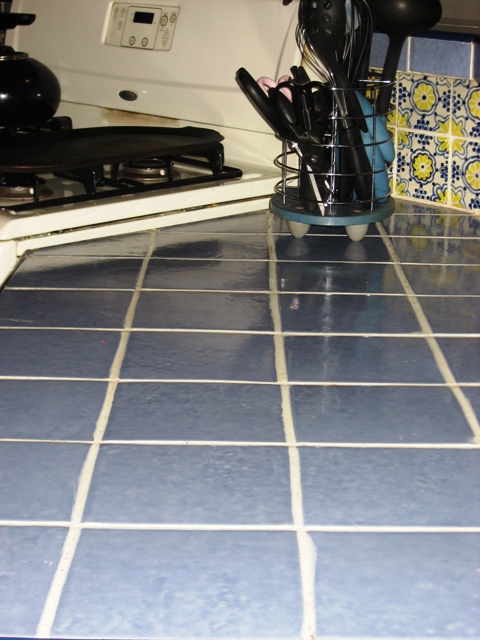 But you see that stove in the back?  That’s the object of my deep-thinking tonight.  Sortof.  It inspired deep thoughts, anyway.  It was starting to look a little grungy from all the cooking of the last few weeks.  It had been wiped, but not CLEANED.  There’s absolutely a difference!!  So I cleaned it.  But just the outside.  As I wiped the oven door and opened it ever so slightly to clean that top edge, I was met by the smell of burnt food.  Ew.  My first thought was “GROSS I will clean that next.”  But as 10 pm approached and I grew weary of listening to Brennah yell from her bed, I abandoned that idea.  I finished scrubbing the stove-top, counters, sink, and even a few cabinet fronts.  Then headed towards the sound of the baby yelling.  As I sat in the dark nursing the cranky one, I thought about my oven.  It looks so pretty now!  Well kindof.  Whatever got burned in there last made a sortof smoke stain that I haven’t been able to get off.  But over all, it looks great!

You’d never guess that my oven is insane.

I’m totally serious.  Not only is it insane, but it hates me!  It has started freaking out, beeping like mad, just as it gets up to temperature.  The only way to make it stop is to unplug it for about 5 min to try and reset it’s weird little brain.  So not only does it stink of burnt food, it’s insane.  But it looks nice!

Tomorrow I will tackle the inside of the oven.  Tonight I’m asking the Lord to begin cleaning out the places in me that need scrubbing.