I saw a bumper sticker last week that made me laugh.  It simply said “It’s all about me.”.  My first thought was “what a pitiful, ridiculous way to live” followed closely by “I actually know a few people who act that way!”.  I went on with my day, not really giving the sticker another thought.

A few days later I saw something else that grabbed me.  It was a billboard with a picture of a cross and under it the words “The reason for the season.”  At first I thought that was different and kinda cool.  And maybe from some angle, it is true.  But the more I think about it, the less I agree with it.  If dying was the only reason Jesus came, I think He could have done it several different ways.  He could have simply arrived in Bethlehem (that part is pretty crucial for the sake of fulfilling prophecy, right?) and then headed over to the cross.  Instead, He fulfilled DOZENS of prophecies, endured horrible trials and heartaches, healed countless people, loved the unlovable, raised the dead, performed incredible miracles, baffled the “wise men”, freed the captive (that’s you and me, for the record), submitted Himself to torture on a cross (all the while asking God the Father to forgive those creeps!), and came back to life again.  Why??  For us.  He did not do all those things because they sounded like fun.  I doubt He enjoyed having nails driven through His wrists, or being whipped so severely that His back did not resemble anything human.  I also do not believe that loving some of the world’s least lovable people was necessarily easy for Him.  He loved them in order to show us how.  He forgave to give us an example.  He came, not just to pay the sacrifice for our sin, but to show us how to live.  Not bound by a list of do’s and don’ts, but in freedom to follow the Father’s direction for each of us individually.

You may feel some sympathy for Jesus when you consider the list of “do’s and don’ts” that was handed to Him by the spiritual elite of His day.  He was often criticized for not “keeping the law.”  He would respond with a simple answer… I am doing what my Father tells me to do.  But I guess that’s a different soapbox for a different day.  For now I’ll just say that God has been teaching me about legalism and it’s been an interesting lesson!

Back to the point at hand… I love that Jesus came for so much more than just paying the sacrifice for us.  As if that wasn’t enough in and of itself, right??  But He endured this painful world for many years before laying down His life for us.  That wasn’t an accident!  His life was for us just as much as His death.  It was all about us.  Like never before, this thought has made me want to study Jesus’ life.  If you haven’t already read it, I would highly recommend Beth Moore’s book called “Jesus, the One and Only.”  It’s incredibly detailed and personal and starts back just before His birth.  If you have any desire to know more about Jesus, you need that book.

Maybe I should make myself my own bumper sticker!  It would have a manger AND a cross, and the words “It was all about me.”

It’s hard to know how to begin writing about yesterday’s events.  When this idea of doing Christmas for the orphans struck me this last summer, I had no clue how it would actually turn out.  But I think I imagined something smaller.  I most certainly did not expect so many people to be so generous with their giving!  I envisioned having maybe 1 gift per child to wrap and give to the orphans.  And then the donations started coming in and I was floored.  And elated.  I started shopping right away for the things I knew the orphanage needed the most.  Turns out, thanks to the generosity of several people, we were able to buy well more than simple neccesities!  I’ve been trying to take plenty of pics along the way, so without further ado… the story in photos!

Tommy and Katie helped wrap gifts! I am so grateful… it would’ve taken days to do it alone!

Every child got their own towel, toothbrush, toothpaste and box of crayons. (Thanks, Tommy and Rebekah for help wrapping again!)

Finally, after much anticipation, Christmas morning arrived!!!  We loaded up all the gifts (so grateful for our Yukon and trailer!) and headed to Teopisca.  We were met in the driveway by waving kids!  I had hoped for an organized method of handing out all the gifts, to ensure each child got to open a few things.  But that was clearly unrealistic!  There was one calm, quiet moment, just before we carried in all the gifts… 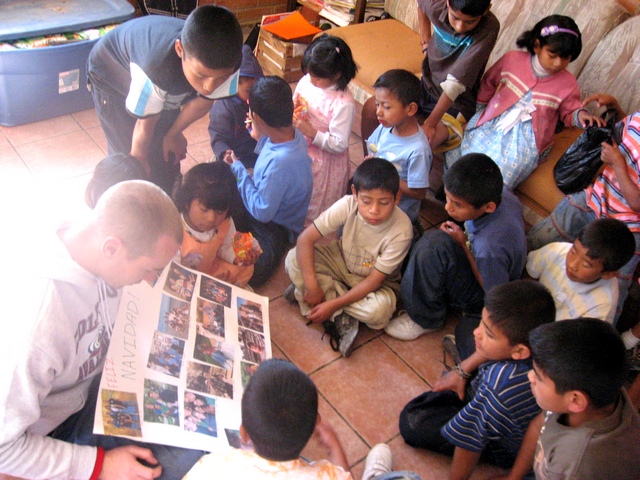 Nathan showed the kids the board of pictures we put together of all the individuals and families who provided the incoming gifts. 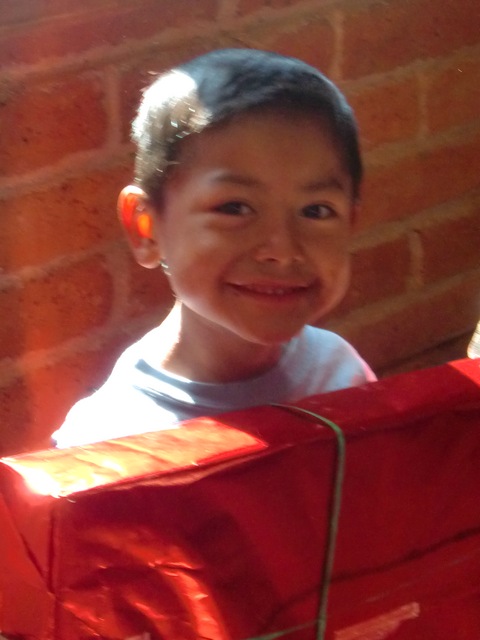 Here come the presents! These sweet kids had no idea what was underneath the wrapping paper, they were just so excited! 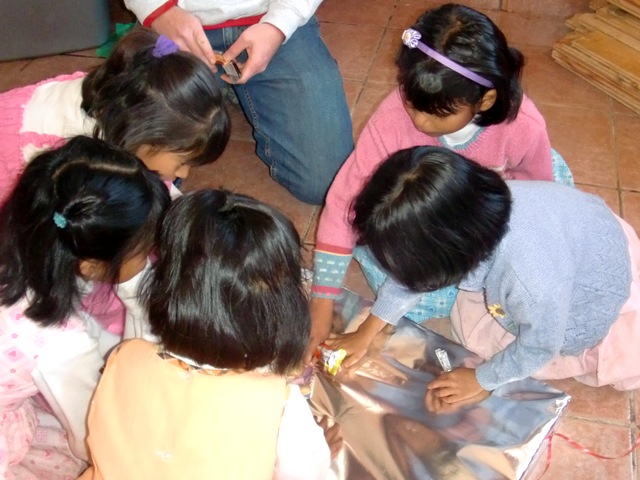 When Nathan announced “This one is for the girls!” these 5 little ones came running! 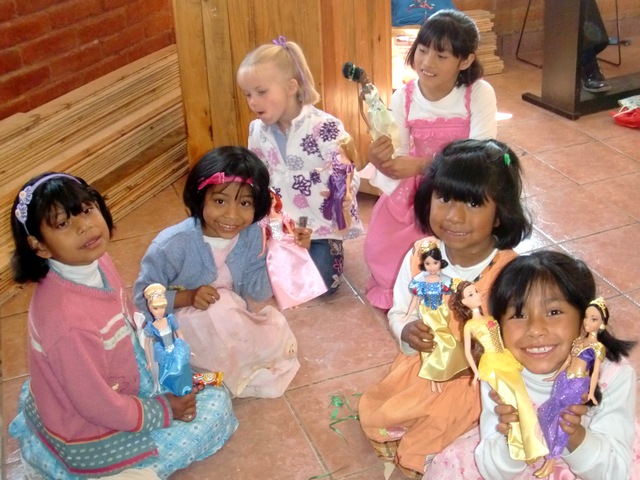 New princess baby dolls for everyone! (Cloe was thrilled about that gift, but she was just fine when it was time to go and leave the doll behind!)

The older boys were completely enthralled with this talking globe. It really is very cool! 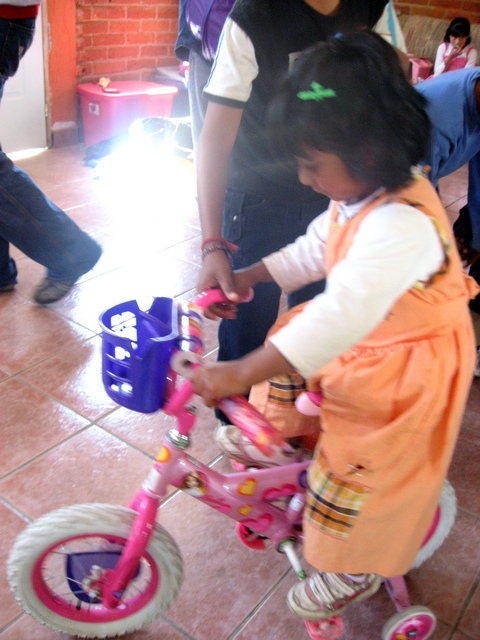 We brought them 4 bikes! It was really hard to get a good picture though… they were all in constant motion! 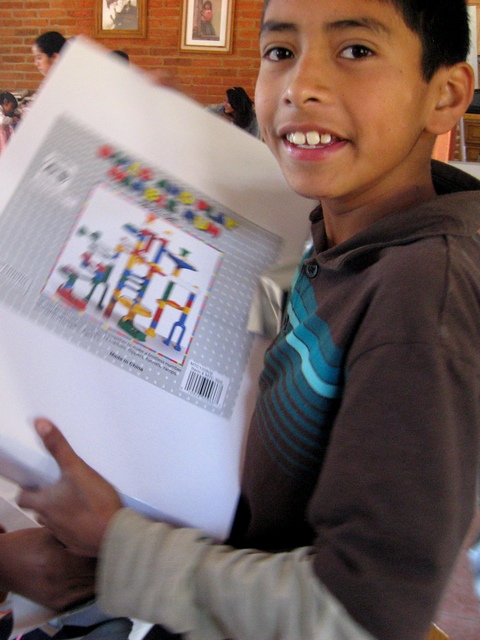 He wasn’t sure what it was, but he kept saying “wow! Thank you!”

There were a few LeapFrog toys for toddlers… this one was his favorite! 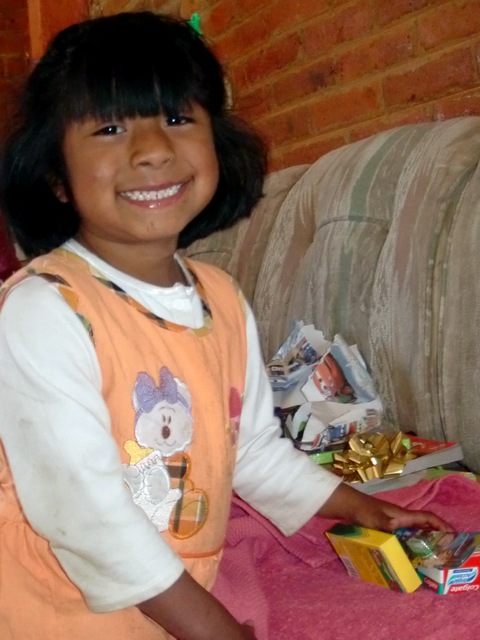 Have you ever been this excited about a new toothbrush and towel?

This T-ball set and the plastic bowling pin/ball set were this little guy’s favorites! 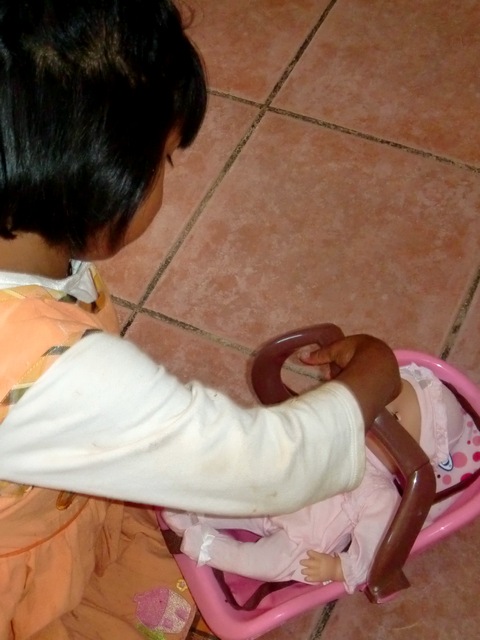 The girls enjoyed getting 3 new baby dolls, and a set that included a stroller, carseat, highchair and play mat for their babies!

Nathan put together these indestructable soccer nets. They also got a new soccer ball AND a new football!

Somehow, even with 3 cameras going, we managed to not get a single picture of Yara (the mama) opening her box of school supplies.  😦  But it was huge!  It contained 30 notebooks, 130 pencils, a huge whiteboard, dry-erase markers and eraser, pencil sharpeners, a giant pack of construction paper and “buen hecho” (good job) stickers, several boxes of batteries (replacements for toys and the talking globe), and more!  I spoke with her after the chaos died down and she was elated.  With tears in her eyes she thanked me over and over again and asked me to pass along her gratitude to those of you who gave toward this project.  We will work on the video that we got of all the excitement and post it as soon as we can!  Here’s one last picture for you.  The playground is thanks to you, too. 🙂 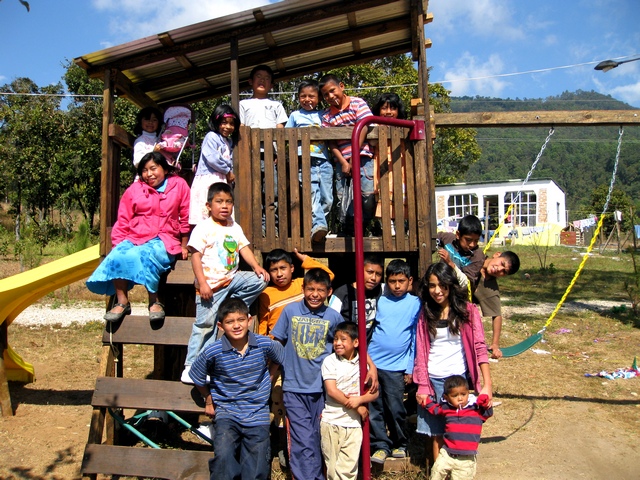 Missing just a few kids… this is them saying “gracias!!!”